Heartstone: A Journey out of the midnight of my soul


According to Mike Donais on Reddit , the card will change every turn until you play it. Princess Huhuran. How would you like a pair of Hyenas in play at the same time as that Savannah Highmane? Oh my. Twilight Flamecaller. The Flamecaller gives Mages a small activator and board clear.

This is a legit Rogue card. Servant of Yogg-Saron. Yeah, this card is Yogg -lite. I might even assemble and bring one to a tournament. Faceless Summoner. Mages get a sweet new 6 drop here.

On the other hand, there is a Magma Rager. Deathwing, Dragonlord. Embrace the Shadow. This might be one of them.

Twilight Summoner. Hrm, is this our new Piloted Shredder replacement? It might not be able to challenge anything, but opponents will have to think twice about when to get rid of it.

Soggoth the Slitherer. Talk about slowing down the meta game big time. Soggoth is a much more improved Spectral Knight. Does he close out the game at the 9 mana slot though? Not sure about that because it seems like a card that can help you stall or buy time for you to find your answers. Wisps of the Old Gods. Possessed Villager.

Villager should see some play. Boom replacement among Warlock decks. That Battlecry opens up some serious spell flexibility for players especially around that stage of the game. Siphon Soul perhaps? This is amazing. Forget Spreading Madness: Yogg here has the ability to steal games for you. On the other hand, he can also steal defeat from the jaws of victory. Spreading Madness. Call of the Wild. With Call of the Wild, I never have to worry about having that problem again! The devs have confirmed specific summoning orders so take note! Blood Warriors. Warrior decks are looking great!

For 3 mana, you get to add a copy of each damaged friendly minion to your hand. This is a card that must have been inspired by Echo of Medivh. Blood Warriors will fit right into control decks especially with all the activators available like the new Ravaging Ghoul. Blood of the Ancient One. Might I recommend using this Astral Communion deck as a base? It comes into play after you control two Blood of the Ancient Ones at the end of your turn. Hey, look at that, another ramp card for Druid decks.

Solid 4 drop option especially since Piloted Shredder is leaving. Twilight Hammer. Will Twilight Hammer be a potential replacement for Powermace leaving Standard? Probably not! Doomhammer is the main weapon of choice in Aggro Shaman but you could make arguments for Twilight Hammer in a more Control oriented deck.

The problem though is that Twilight Hammer has a tough time challenging other 5 cost minions.

Ravaging Ghoul. Fantastic Warrior card! Ravaging Ghoul is a great answer to this. Master of Evolution. This interesting minion converts and upgrades one of your weaker minions into something stronger. The new minion will be random, not class-specific. Thing from Below. It has Taunt. More importantly, it can be made cheaper based on the number of Totems that get summoned.

Vilefin Inquisitor. Got that? Aside form that tiny tidbit, feel free to load up on some big bad minions. That is, unless you happen to draw …. Ancient Harbinger. The Ancient Harbinger provides a neat way for you to thin out your deck and start setting up your hand for some of your heavy hitting minions — or more likely, to draw a specific minion out to prepare to play it. Seriously though, this card is going right into one of my Mage decks. Adding three cards to your hand for the price of 5 mana means you can take your game the distance and even pull off something like Fatigue Mage where your games end well beyond you running out of cards.

Steward of Darkshire. Hello, Steward! Silver Hand Recruits will last an extra hit on the battlefield now. Skeram Cultist. Shadow Word: Horror. Good flex card to have one copy of. Two of them might be overkill. Druid beast-themed decks might not be a factor in the current meta game but things will change when standard is adopted along with any classic cards that get changed. Scaled Nightmare.

Ooh, another new dragon card to add to our dragon deck. Mukla, Tyrant of the Vale. Seems like a perfect counter of a tech card against aggressive minion based decks. At 5 mana, it can fit in into decks as a suitable replacement for Sludge Belcher — except instead of blocking minions and trading, the Apothecary can help mitigate some of the damage taken by the player. Ragnaros, Lightlord. This is not a joke. Xaril, Poisoned Mind. Tentacles for Arms. Whenever it gets destroyed, it will go right back to your hand. The Boogeymonster.

If there was a way to have the Boogeymonster kill a bunch of minions in succession in the same turn, it would be absolutely terrific. But the Boogeymonster has to directly attack something and not have a minion run into it in order to get buffed. This guy looks like a sleeper pick for now. I can see this card being beneficial in a token deck. If it dies, the rest of your minions get a slight buff. It looks like an elephant.

There he is! One of the big baddies of the expansion! This is your finisher. A few things to note:. SpenserTrompke N'Zoth embraces chaos, so the resurrected Deathrattle minions will be random. Renounce Darkness. This is the ultimate reset and random deck generator — in the middle of a game! Undercity Huckster.

3 free packs for loging up today!

I can see this card being a staple in Rogue decks for standard going forward. Faceless Shambler. Bonus: Comes with a taunt. Hallazeal the Ascended. This 5 mana minion might not close out a game for you, but he does provide extra longevity. With spells like Lightning Storm or Elemental Destruction , the health restored from damage dealt will add up quickly. The new Warlock epic is a slightly better version of Twisting Nether. Play: "Dis document looks legally bindin'. Crazed Worshipper: Every month they share a pancake breakfast with the Perfectly Rational Worshippers.

Play: "Ah bleed fer C'thun! Play: "Take your medicine. Psych-o-Tron: "Annoyinger-o-Tron" was just too unwieldy. And accurate. Play: "Hell-o hell-o hell-o. But… he sure does miss piloting those shredders. 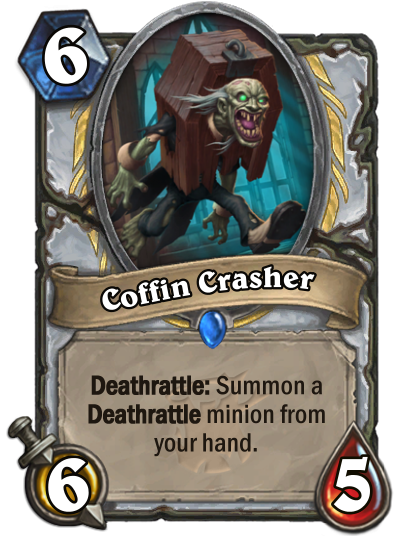 Play: "I was right all along. Scaled Nightmare: I like it because it scales. Play: "The Sleeper has awoken! Grotesque Dragonhawk: They say that "grotesque is in the eye of the beholder," but that's just because they've never seen a Grotesque Dragonhawk. Can I leave a message? Play: "Terror absolute.

Play: "This world, so delicious. Add just a dash of sugar and stir. Play: "Fall before the Old Gods. Play: "My dreaming ends. Your nightmare Was a mistake. Your fault. Is an illusion. Is close. Play: "The dragons shall kneel before me! Play: "Anger. Play: "I taste the essence of your soul Embrace your rage. Play: "Bow down before the God of Death. No comments:.